Music is one of the most important triggers in culture and in our lives. How music has influenced in fashion or fashion has influenced in music? Personally, I think it would be the first, because without the style and lyrics of these musicians there would be no significance within the historical context of the world of fashion. The musicians, and especially singers take an aesthetic look (there are some who do not realize their own importance, or they don’t seem to be relevant into the world of fashion), but I think thanks to them as a fashion designers we can be inspired by them.

When I was enrolled in third semester in Fashion Design here in Bogota, Colombia I realized that I was very passionate about music labeled as Gothic. I always found fascinating about the decade of the late 70’s which expressed the discontent of the new artists with regard to the Glam so Florescent and strident at the time. That was the time when two artists, among many others shared their ideology: Siouxsie Sioux and Robert Smith. From that time it came the inspiration for my collection Ashes, which you can see it in this blog. I decided on these two musicians because they transmit the vibe and the environment of that era. Era where there was an underground bar called the Batcave, which was in the Soho area in London Street. Robert and Siouxie were there often, each one of them sang in different punk bands, punk romantic, melancholic and dark.

Let us talk about a little history here, the Batcave (Bat Cave) was not the Batcave of Batman, was a place where the punks who did not want to belong to the traditional punk (Sex Pistols, the Clash, etc …), as their ideology they don’t share the beliefs of anarchy and fury against the Queen of England, it was more of a nostalgic punk, romantic and melodic. It was a punk who adapted his clothes, his clothes in the dark with an aggresive touch and less repressive. Black became the color of the moment, principal  (I want to say that black is not a color, because it is the absence of it), but in this case the black color, it is called as it is part of a color palette. The black in this new generation of punks is complemented by colors like red, green, yellow and purple classic / magenta. Makeup is strong, returning to the era of the early classical theater and cinema in the late 20s, where actresses like Theda Bara (actress with vampire touches) becomes an inspiration for Siouxie’s makeup. The white and black of German Expressionism, is also part of the gothic imaginary and punk of that era of the late 70’s. Robert Smith’s hair is a messier punk, a punk more uncomplicated. It’s like to see Dr. Caligari (German Expressionism film) but in music. Robert Smith nor Siouxie think that they were part of fashion, or make their fans to dress like them, but unfortunately for Robert and Siouxie, fans made their music tastes a fashion way of life, physical and corporeal. Why do I say unfortunately? Because for musicians and underground music artists they never liked their fans to be like them. I remember an interview where Robert said that when The Cure reached the peak of its career, Robert saw some fans in the lobby of the hotel one day and he stared at them and gave a terrified look. Nowadays, Robert is used to it but at that moment it seemed worthless and fearful thing to him. 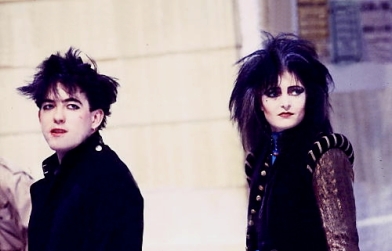 Dark Punk exists, even within the historical context do not talk much about it, since it is not a business target and that’s the best of it. The Goth Aesthetics is unique in that we see globally influenced by this genre in clothes, in the way they express themselves and feel. For me, I see the dark punk like an intelectual individual who have its own aesthetic in its entirety. A human being who wants attention from their deepest secrets, where light and shadow run an important role in its exterior and interior. I haven’t had the privilege of traveling to London, but is one of the things that captivated me and caught my attention. The aesthetics of this style of music has many elements to exploit and very rich. Siouxie and Robert are icons where many of us feel identified. The feminine side, masculine, androgynous gothic. Where the beauty codes are set in the dark and bright side. For others it is scary and creepy, for those who love this aesthetic is beautifully dark, magical and engaging.

One Reply to “Dark Punk, Siouxie Sioux and Robert Smith”